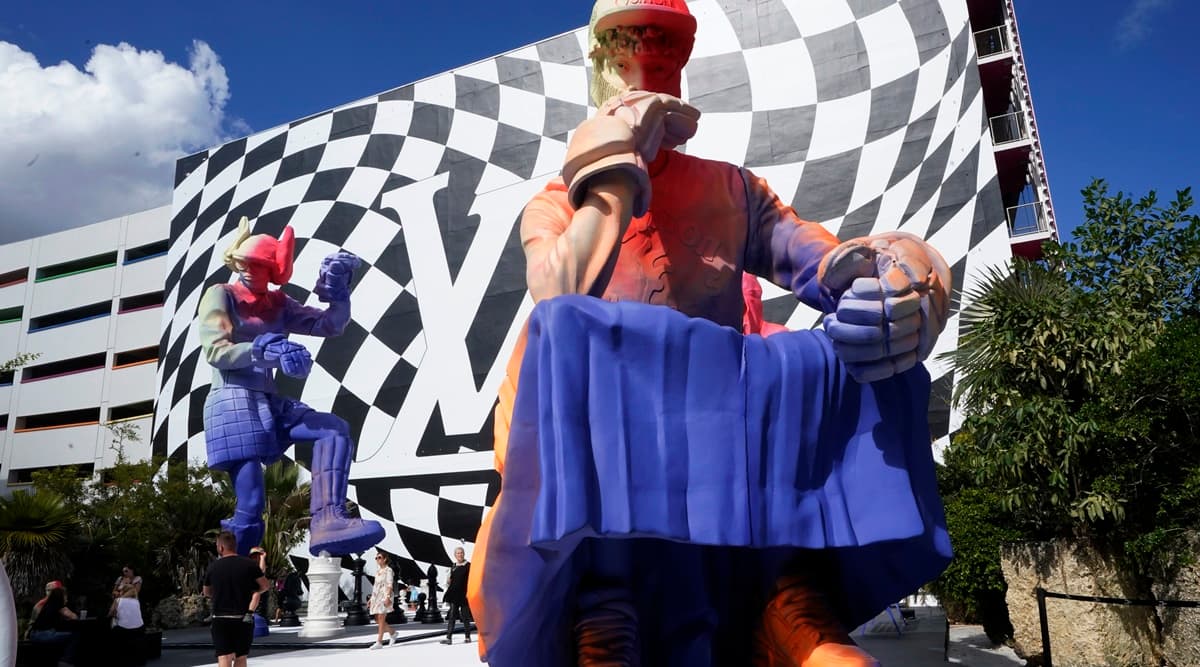 The Miami menswear event, an unofficial kickoff to the prestigious Art Basel fair, had been in the works for months. Guests were ferried by yachts to the star-studded affair held on an island. Celebrity attendees, including Kim Kardashian West and her daughter North, Ye, the rapper formerly known as Kanye West, model Bella Hadid, Joe Jonas, Maluma and Pharrell, arrived in sleek LV monogrammed silver speedboats.

Kid Cudi and Erykah Badu performed at an after-party. “Hey Virgil,” she yelled at the start of her set, later saying “we want to see you fly.”

Abloh, who died Sunday after a lengthy battle with cancer, was known for pushing boundaries as the head of the legendary French fashion house, thanks to his childlike curiosity and an eagerness to instill a sense of playfulness. His groundbreaking fusions of streetwear and high couture made him one of the most celebrated tastemakers.

A focal point of the show was a giant, red LV monogrammed hot air balloon that puffed flames as Abloh’s voice was heard in the background.

The brand’s CEO Michael Burke said Abloh’s wife and family wanted the show to go on. He had just spoken to the young designer on Saturday night, describing the inspiration for the show as a coming of age of sorts because “inspiring future generations was very important to Virgil.”

“We had imagined it all and he was distraught not to be here in person,” Burke said.

While the clothes were like Abloh — playful, colorful and vibrant — the mood was somber. During and after the show, many in the audience wiped away tears, standing to hug each other or offer a pat of comfort.

The sparse clapping at the end was awkward. Unlike most shows, no one got up to mingle or talk, but instead sat in heavy silence.

The designer’s traditional finale bow was not coming and never would again and as fireworks lit up the Miami skyline, the audience seemed painfully aware of his absence.

Instead, the show circled back to the bold hot air balloon as the designer’s voice said “life is short” for “worrying about what someone thinks you can do versus knowing what you can do” — a sort of anthem that a generation of young fans rallied behind.

Sculptures designed by Louis Vuitton are displayed in Miami’s Design District, Tuesday in Miami. The display is part of Art Basel and related art events that start this week. (AP Photo/Marta Lavandier)

Lamont Spears traveled from Atlanta just for the show, wearing a fuzzy LV monogrammed hoodie coat and a sweatshirt with Abloh’s picture.

“It’s a very sad moment, but we’ve got to celebrate his life, we’ve got to keep on pushing because he made a way for us to keep going, to keep being confident,” said the 35-year-old. “He showed me that I can.”

Abloh in 2018 became the first Black man to serve as Louis Vuitton’s director of men’s wear in the French design house’s storied history. He grew up outside of Chicago, his first generation Ghanaian American seamstress mother teaching him to sew.

New York stylist Memsor Kamarake, who saw Abloh’s first show in Paris, flew in specifically for the final tribute, saying through tears after the fireworks, “I felt like now I can finally grieve him.”

“So often black folks are depicted through pain, through struggle, that’s why it was so important for him to tap into this childlike joy,” Kamarake said.

Above a red carpet leading to an outdoor after-party, the sky lit up with red dots that danced in various configurations before coming together to say “Virgil was here.”

Abloh, who founded his own Off-White label in 2013, had a vast creative presence outside of clothing. His sculpture “Dollar a Gallon,” unveiled this week during Art Basel, is a commentary on the effect of advertising on the impressionable.

He also designed furniture for IKEA, refillable bottles for Evian and Big Mac cartons for McDonald’s. His work was exhibited at the Louvre, the Gagosian and the Museum of Contemporary Art Chicago.

Abloh had a prominent influence in streetwear. He interned with Ye at the LVMH brand Fendi, was the rapper’s creative director and scored a Grammy nomination as art director for the 2011 Ye-Jay-Z album “Watch the Throne.”

“I think it’s going to be the most important moment ever in LV history,” said David Filipucci, a 21-year-old who traveled from the Netherlands to attend the show.

“LV for the moment is Virgil. He made it more special.”